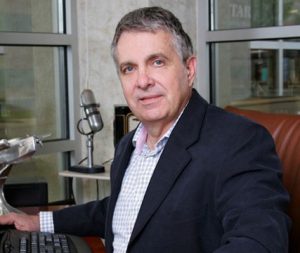 Bruce Munson is a lawyer by day and still has never managed to get radio out of his blood. It started when he was in high school. He got his start under the radar, with a pirate FM station located in a Halteman Village garage. Then came WLBC, WERK and the legendary wnap (always lower case) in Indianapolis. He built, operated and later sold cable television systems in small Indiana towns, and along the way thought a law degree would be helpful in that field. Somehow, he ended up practicing law for three decades, but he is still looking for the bread crumb trail back to radio. Bruce has four children and five grandchildren that he loves spending time with when he’s not itching the radio scratch.